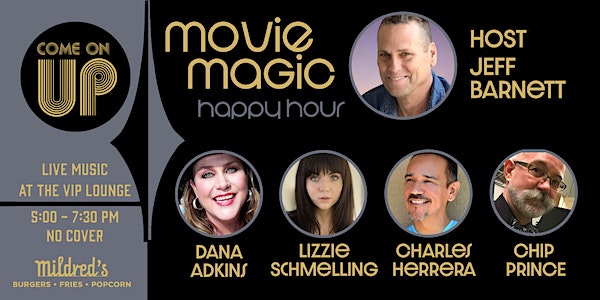 Come on up for an evening of the film scores you know and love with your host, talented Broadway artist Jeff Barnett.
About this event

Jeff Barnett has performed on numerous stages across the country and has played in some of our finest venues. He made his professional debut in the original San Francisco Company of Les Miserables and has enjoyed working with and singing for such luminaries as Leslie Uggams, Sidney Poitier and Sean Connery.

He began his career in the rock world, most notably with his band Escort Service at The Old Waldorf in San Francisco. He returned to the legitimate stage in shows like Godspell, Jesus Christ Superstar, 42nd. St., Follies, Into the Woods, 1776, Chicago, Beyond Therapy and many more.

He was also a guest with Norwegian Cruise Lines for over two years.

DANA ADKINS is a multi-talented performer who has been singing, dancing, acting, hosting TV personality and hosting shows internationally for over 40 years. Her stage credits include leading roles in Hello Dolly (Dolly Levi), Annie Got Your Gun (Annie Oakley), The Best Little Whorehouse in Texas (Miss Mona), Chicago (Matron Mama Morton), Tommy ‘ (The Acid Queen) and ‘The Mystery’. by Edwin Drood (Princess Puffer). She also won the Desert Theater League Award for Outstanding Supporting Actress in Ruthless! The musical. “She has headlined the world, including a lengthy streak as one of the stars of the acclaimed San Francisco production of Steve Silver’s Beach Blanket Babylon. She continues to dedicate her time to Emcee/Sing at several charity events. Dana is also a tour guide for Let’s Go Travel.

Lizzie Schmelling is a Joshua Tree native actress and singer who has been performing in and around the Coachella Valley for nearly fifteen years. Earlier credits include RUTHLESS! THE MUSICAL (Tina), THE ADDAMS FAMILY (Wednesday), A DOLL’S HOUSE PART II (Emmy), THE ROCKY HORROR SHOW (Magenta), THE BEEBO BRINKER CHRONICLES (Laura) directed by Judith Chapman, MAMMA MIA (Sophie) and last CABARET (Sally). Her work can also be seen in the short film ASPHYXIA (2020) and the feature film THE ANNIVERSARY (2022). Five-time Desert Theater League award winner. Lizzie thanks her friends and family for their continued love and support. Black Lives Matter.

Singer, actor and cabaret artist Charles Herrera has appeared in musicals, operettas, cabaret shows and theater productions across the country and abroad. He has received five DESERT STAR awards, all in the cabaret/variety category. He performs at several venues in the Palm Springs area including every Wednesday night in the Purple Room with Darci Daniels and Michael Holmes, at the Runway Restaurant in Cathedral City.

Chip Prince has over 30 years of experience as a pianist and conductor of Broadway shows and touring, 22 of those years have been based in New York City. He was Associate Conductor on the National Tour of Newsies and can be heard playing the piano in the Broadway HD film. New York and National Tour as keyboardist and/or conductor have included Les Misérables, Sunset Boulevard, Miss Saigon, Mary Poppins, Ragtime, The Fantasticks, Deaf West’s Big River, Baz Luhrmann’s La Bohème and A Gentleman’s Guide to Love and Murder.

*Minimum two drinks – on arrival – Vouchers can be purchased at discounted prices. Tokens can be used at this event and at any of our other events when the bar is open.